Let’s Pamper The Pros Some More

There’s the story about Ben Hogan playing an exhibition somewhere and using a local caddy. Hogan walked up to his ball at one point, asking the caddy how far to the pin. The caddy, thrilled that the great Hogan would ask him for yardage, answered, “About 145-146.” Hogan gave the caddy a withering stare and said, “Well, which is it?” Speculation on tour was Hogan, a fanatic on the practice field, knew his game so well, he could differentiate a distance of one yard.

True or not, it’s a great example of how professional golfers of a different era played the game of golf. Not only did they rely on their own gut feelings on yardage, but they played on some golf courses with less than optimum set-ups and maintenance.

Nowadays, professional golfers play on fairways like carpets and greens that are exquisite. How many times on a TV presentation do we hear announcers talk about players being “unlucky” in drawing tough lies, never mind the lamentation if a ball land in a divot.

Another turn off watching these supposed best golfers in the world is the glacier-like time it takes to refer to the yardage book in deciding what club is necessary for the next shot. Most times, like the eternity taken on lining up a putt, the time spent makes no difference in the outcome.

The PGA of America announced Tuesday that it would allow the use of distance-measuring devices at three of its major championships beginning this year. The news came as a surprise to many in the golf world. The decision came to speed up play, according to PGA president Jim Richerson. Will this decision make golf rounds decrease by 10-15 or 20 minutes? Doubtful. Now, instead of watching players flip pages and compare data with their caddy (who uses a book with the same information), we’ll see player and caddy pass the eyepiece back and forth, saying, “I got 122. What do you see?”

Notice players have no problem accepting decisions that help their game but get all bent out of shape on rulings that they feel will handicap them. Deaden the golf ball, decrease driver length, perish the thought. Golfers nowadays don’t play specific tournaments because the golf course “Doesn’t suit my game.” Gee, that’s tough.

It would seem to me that the “best” golf players in the world should be able to adapt to whatever ruling the honchos of golf decide is best for the game as a whole. Not to ruin their perception, but the game of golf doesn’t revolve around the professional golfer. 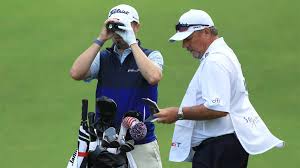